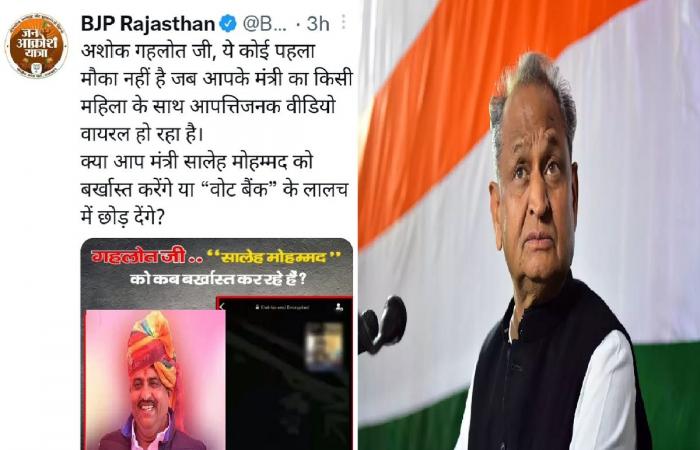 When is Gehlot ji sacking Saleh Mohammad ji – BJP
The purported video of the minister with the woman and the related news post have been posted by BJP Rajasthan on its Facebook and Twitter pages. A pornographic video of the minister has also been uploaded along with the woman in this post. Through this post, BJP has asked that Gehlot ji, when are you sacking Saleh Mohammad ji. Along with this, it has also been asked that what respect will such ministers give to women.

Know how the leaked video
According to Jodhpur’s Shergarh police station in-charge Devendra Singh, on December 5, the victim woman had filed a case. He said that the video was recorded by mistake. A few days ago, while playing with the mobile of the girl, the video was mistakenly forwarded to someone. The victim woman also said that two months ago, some accused had demanded Rs 25 lakh by threatening to make the obscene video viral. The accused forced her to have sex. Following the woman’s complaint, the police arrested Pankaj Vishnoi, Vikas, Ramjas Vishnoi, Sumit Vishnoi and Ravindra Vishnoi on charges of blackmail. (Report – Ramswaroop Lamrod, Jaipur)