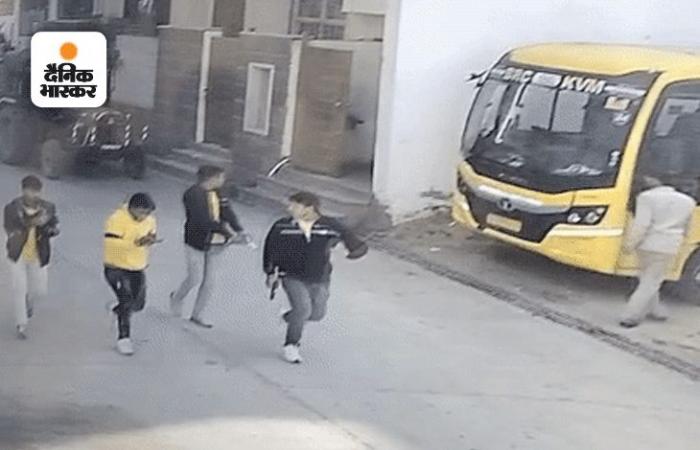 The firing miscreants have fired even while running away. There is a big coaching institute in this area.

Rajasthan’s notorious gangster Raju Thehat was murdered in a gang war in Sikar this morning. The miscreants who arrived in coaching dress called Thehat out by ringing the bell and opened fire. Thehat is known to have been hit by more than three bullets. Rajasthan Director General of Police (DGP) Umesh Mishra told that a miscreant also made a video of this firing. After killing, the miscreants fled in an Alto car.

Mishra told that the miscreants will go towards Punjab and Haryana border. Rajasthan Police is behind these miscreants, strict security orders have been given across the state. All SHOs have been ordered to remain in the field. Police said that Thehat’s house is on Piprali Road in the city. There is also information about the death of one of his relatives in the firing that took place here. However, the police have not confirmed the second death.

All the four miscreants have been seen in the investigation of CCTV footage installed in this area. In which he is seen running with weapons. On the other hand, as soon as the information about the firing was received, senior police officers including Sikar SP Kunwar Rashtradeep reached the spot and on the instructions of the DGP, blockade has been done in the entire state. Thehat’s gang was very active in Shekhawati and had enmity with the Anandpal gang as well. Even after Anandpal’s encounter, the fight for supremacy between the two gangs continued.

Police caught then started living in Sikar
Raju wanted to strengthen his roots in Jaipur after Thehat Sikar. For this purpose, he had made Jaipur his safe place.

Raju Thehat has received information about shooting outside his house. However, it is not yet clear whether the bullet was fired in a gang war or an encounter by the police.

Sikar used to call by the name of Boss
Gangsters Raju Thehat is fond of living a luxury life. He moves around with the convoy on expensive cars and bikes. Gangster Raju Thehat has come to be known as Sikar Boss.

During his stay in Jaipur Jail, he also made his base in Jaipur for the purpose of increasing his gang. The house from which he was caught in Suez Farm, Jaipur, is said to be worth Rs 3 crore.

Even during his imprisonment, there were several cases of his giving protection by demanding ransom. People from the Raju Thehat Gang (RTG) family are associating with the gangster. Along with Thehat, four of his associates were also caught in Jaipur 9 months ago. In which he also had three gunmen and a cook. After coming out of jail on bail about 3 months ago, Raju is engaged in increasing the Thehat gang. People from the Raju Thehat Gang (RTG) family are associating with the gangster.

In such a situation, he used to keep discussing with his acquaintances who were already active in politics. The photos shot during the meeting also remained in discussion. Raju Thehat used to shoot and share photographs of roaming around, eating and drinking with a group of miscreants. After Shekhawati, a new place was also built in Jaipur
Rajasthan’s infamous gangster Rajendra alias Raju Thehat had made Jaipur his new base after Shekhawati. Thehat had made BJP leader (former MLA) Prem Singh Bajor’s house a home at Suez Farm in Mahesh Nagar, Jaipur. For security, more than 30 CCTVs were installed at the house. 3 gunmen also lived together. In February this year, he had entered the house of Mahesh Nagar in Jaipur. Earlier, the notorious gangster had removed the gate of the colony from the corner of the street. He has got this gate installed near his abode. This gate was locked only after the arrival of gangster Thehat. This gate was opened only for the entry of special members. Vehicles used to be parked in the vacant plot lying near here.

,news is being updated, Vande Bharat Train: Maharashtra will get 2 Vande Bharat trains, PM Modi will flag off on February 10